IATA Forecasts Global Airline Industry to Return to Profitability in 2023 (07/12/22)  IATA has forecast the global airline industry to return to profitability in 2023 as airlines continue to cut losses stemming from the effects of the COVID19 pandemic to their business in 2022. 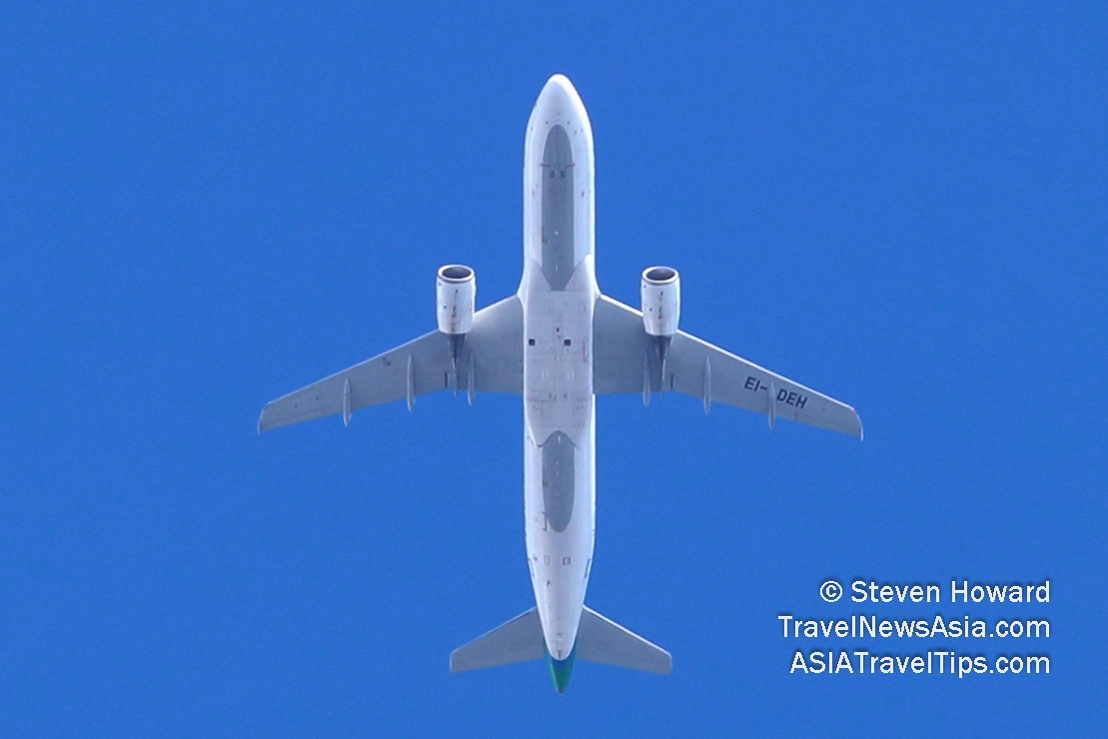 Ryanair B737-8 reg: EI-DWH. Picture by Steven Howard of TravelNewsAsia.com

“Resilience has been the hallmark for airlines in the COVID19 crisis,” said Willie Walsh, IATA’s Director General. “As we look to 2023, the financial recovery will take shape with a first industry profit since 2019. That is a great achievement considering the scale of the financial and economic damage caused by government imposed pandemic restrictions. But a $4.7 billion profit on industry revenues of $779 billion also illustrates that there is much more ground to cover to put the global industry on a solid financial footing. Many airlines are sufficiently profitable to attract the capital needed to drive the industry forward as it decarbonizes. But many others are struggling for a variety of reasons. These include onerous regulation, high costs, inconsistent government policies, inefficient infrastructure and a value chain where the rewards of connecting the world are not equitably distributed.”

Improved prospects for 2022 stem largely from strengthened yields and strong cost control in the face of rising fuel prices.

Air cargo revenues played a key role in cutting losses with revenues expected to reach $201.4 billion, an improvement compared with the June forecast, largely unchanged from 2021, and more than double the $100.8 billion earned in 2019.

Overall revenues are expected to grow by 43.6% compared to 2021, reaching an estimated $727 billion.

Most other factors evolved in a negative manner following a downgrade of GDP growth expectations (from 3.4% in June to 2.9%), and delays in removing COVID19 restrictions in several markets, particularly China.

On the cost side, jet kerosene prices are expected to average $138.8/barrel for the year, considerably higher than the $125.5/barrel expected in June. That reflects higher oil prices exaggerated by a jet crack spread that is well-above historic averages. Even with lower demand leading to reduced consumption, this raised the industry’s fuel bill to $222 billion, well above the $192 billion anticipated in June.

“That airlines were able to cut their losses in 2022, in the face of rising costs, labor shortages, strikes, operational disruptions in many key hubs and growing economic uncertainty speaks volumes about peoples’ desire and need for connectivity. With some key markets like China retaining restrictions longer than anticipated, passenger numbers fell somewhat short of expectation. We’ll end the year at about 70% of 2019 passenger volumes. But with yield improvement in both cargo and passenger businesses, airlines will reach the cusp of profitability,” said Walsh.

In 2023 the airline industry is expected to tip into profitability. Airlines are anticipated to earn a global net profit of $4.7 billion on revenues of $779 billion (0.6% net margin). This expected improvement comes despite growing economic uncertainties as global GDP growth slows to 1.3%, from 2.9% in 2022.

“Despite the economic uncertainties, there are plenty of reasons to be optimistic about 2023. Lower oil price inflation and continuing pent-up demand should help to keep costs in check as the strong growth trend continues. At the same time, with such thin margins, even an insignificant shift in any one of these variables has the potential to shift the balance into negative territory. Vigilance and flexibility will be key,” said Walsh.

Passenger: The passenger business is expected to generate revenues of $522 billion with passenger demand to reach 85.5% of 2019 levels over the course of 2023.

Much of this expectation takes into account the uncertainties of China’s Zero COVID policies which are constraining both domestic and international markets. Nonetheless, passenger numbers are expected to surpass the four billion mark for the first time since 2019, with 4.2 billion travelers expected to fly.

Passenger yields, however, are expected to soften (-1.7%) as somewhat lower energy costs are passed through to the consumer, despite passenger demand growing more quickly (+21.1%) than passenger capacity (+18%).

With economic uncertainty, cargo volumes are expected to decrease to 57.7 million tonnes, from a peak of 65.6 million tonnes in 2021.

As belly capacity grows in line with the recovery in passenger markets, yields are expected to take a significant step back. IATA expects a fall of 22.6% in cargo yields, mostly in the latter part of the year when the impact of inflation-cooling measures are expected to bite.

Costs: Overall costs are expected to grow by 5.3% to $776 billion. That growth is expected to be 1.8 percentage points below revenue growth, thus supporting a return to profitability. Cost pressures are still there from labor, skill and capacity shortages. Infrastructure costs are also a concern.

Jet kerosene is expected to average $111.9/barrel, down from $138.8/barrel. This decrease reflects a relative stabilization of fuel supply after the initial disruptions from the war in Ukraine. The premium charged for jet fuel (crack spread) remains near historical highs.

Risks: The economic and geopolitical environment presents several potential risks to the 2023 outlook:

– While indications are that there could be an easing of aggressive inflation-fighting interest rate hikes from early 2023, the risk of some economies falling into recession remains. Such a slowdown could affect demand for both passenger and cargo services. It would, however, likely come with some mitigation in the form of lower oil prices.

– The outlook anticipates a gradual re-opening of China to international traffic and the easing of domestic COVID19 restrictions progressively from the second half of 2023. A prolongation of China’s Zero COVID policies would adversely affect the outlook.

– If materialized, proposals for increased infrastructure charges or taxes to support sustainability efforts could also eat away at profitability in 2023.

“The job of airline managements will remain challenging as careful watch on economic uncertainties will be critical,” said Walsh. “The good news is that airlines have built flexibility into their business models to be able to handle the economic accelerations and decelerations impacting demand. Airline profitability is razor thin. Each passenger carried is expected to contribute on average just $1.11 to the industry’s net profit. In most parts of the world that’s far less than what is needed to buy cup of coffee. Airlines must remain vigilant to any increases in taxes or infrastructure fees. And we’ll need to be particularly wary of those made in the name of sustainability. Our commitment is to net zero CO2 emissions by 2050. We’ll need all the resources we can muster, including government incentives, to finance this enormous energy transition. More taxes and higher charges would be counter-productive.”

All regions’ financial performance continues to improve since the depth of the pandemic losses seen in 2020. North America is the only region to return to profitability in 2022, based on IATA’s estimates. Two regions will join ranks with North America in this respect in 2023: Europe and the Middle East, while Latin America, Africa and Asia-Pacific will remain in the red.

North American carriers are expected realize profits of $9.9 billion in 2022 and $11.4 billion in 2023. In 2023, passenger demand growth of 6.4% is expected to outpace capacity growth of 5.5%. Over the year, the region is expected to serve 97.2% of pre-crisis demand levels with 98.9% of pre-crisis capacity. Carriers in the region benefitted from fewer and shorter-lasting travel restrictions than many other countries and regions. This boosted the large US domestic market, as well as international travel, notably across the Atlantic.

European carriers are expected to see a loss of $3.1 billion in 2022, and a profit of $621 million in 2023. In 2023, passenger demand growth of 8.9% is expected to outpace capacity growth of 6.1%. Over the year, the region is expected to serve 88.7% of pre-crisis demand levels with 89.1% of pre-crisis capacity. The war in Ukraine has curtailed the activities of some of the region’s carriers. Operational disruptions at some of the continent’s hubs are being resolved, but labor unrest continues at various locations.

Asia-Pacific is critically held back by the impact of China’s zero COVID policies on travel and the region’s losses are largely skewed by the performance of China’s airlines who face the full impact of this policy in both domestic and international markets. Taking a conservative view of progressive easing of restrictions in China over the second half of 2023, we nevertheless expect strong pent-up demand to fuel a quick rebound in the wake of any such moves. The region’s performance receives a significant boost from profitable air cargo markets, in which it is the largest player.

Middle East carriers are expected to post a loss of $1.1 billion in 2022, and a profit of $268 million in 2023. In 2023, passenger demand growth of 23.4% is expected to outpace capacity growth of 21.2%. Over the year, the region is expected to serve 97.8% of pre-crisis demand levels with 94.5% of pre-crisis capacity. The region has benefitted from a certain degree of re-routing resulting from the war in Ukraine, and more significantly so from the pent-up travel demand using the region’s extensive global networks as international travel markets re-opened.

Latin American carriers are expected to post a loss of $2 billion in 2022, reducing to $795 million in 2023. In 2023, passenger demand growth of 9.3% is expected to outpace capacity growth of 6.3%. Over the year, the region is expected to serve 95.6% of pre-crisis demand levels with 94.2% of pre-crisis capacity. Latin America has shown buoyancy over the year, largely owing to the fact that many countries began lifting their COVID19 travel restrictions since mid-year.

African carriers are expected to post a loss of $638 million in 2022, narrowing to a loss of $213 million in 2023. Passenger demand growth of 27.4% is expected to outpace capacity growth of 21.9%. Over the year, the region is expected to serve 86.3% of pre-crisis demand levels with 83.9% of pre-crisis capacity. Africa is particularly exposed to macro-economic headwinds which have increased the vulnerability of several economies and rendered connectivity more complex.

“The expected profits for 2023 are razor thin,” Walsh said. “But it is incredibly significant that we have turned the corner to profitability. The challenges that airlines will face in 2023, while complex, will fall into our areas of experience. The industry has built a great capability to adjust to fluctuations in the economy, major cost items like fuel prices, and passenger preference. We see this demonstrated in the decade of strengthening profitability following the 2008 Global Financial Crisis and ending with the pandemic. And encouragingly, there are plenty of jobs and the majority of people are confident to travel even with an uncertain economic outlook.”

Passengers are taking advantage of the return of their freedom to travel. A recent IATA poll of travelers in 11 global markets revealed that nearly 70% are traveling as much or more than they did prior to the pandemic. And, while the economic situation is concerning to 85% of travelers, 57% have no intention to curb their travel habits.

– 91% said that connectivity by air is critical to the economy;

– 90% said that air travel is a necessity for modern life;

– 87% said that air travel has a positive impact on societies; and

– Of the 57% familiar with the UN Sustainable Development Goals (SDGs), 91% understand that air transport is a key contributor.